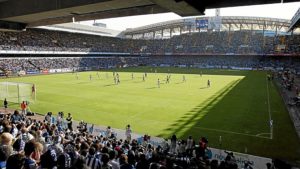 Did you know that the Riazor Stadium Tuene a capacity of 34,600 spectators? We talk about the stadium of Real Club Deportivo Coruna is located in the city of La Coruna. It was opened in 1944 and has since hosted three matches of the World Cup in Spain in 1982 and the final of the Cup of Spain 1947. Learn more interesting facts calling phone Riazor Stadium to find this post.

Riazor Stadium has dimensions of 105 x 68 meters and is located next to the beach that bears his name , in the heart of the city. The stadium has been renovated their facilities gradually to adapt to the rules of UEFA for the matches in Champions League. It has a press room that can accommodate more than 170 journalists, four major areas of bleachers divided into: Tribuna, Marathon, Preferential and Pavilion, shop, locker rooms and first team monitoring system, among other services. Contact calling the Riazor Stadium, 981,189,800 available from Monday to Sunday from 8.00 to 00.00. Another way to know the stage is conducting a guided tour . In them you can learn the stands, the press area and the presidential box, but will not have access to the locker room or the trophy room. It can be performed individually paying 4 euros or group of up to 20 people. For more information about the visit and buy your tickets, you must call the number 608084705.

The deportivista Service Office is where partners, shareholders and fans can purchase shares, renew subscriptions and register as partners and public tickets for matches. You can call the service care aficionado Riazor Stadium , the number is 981 22 94 10. It is in the VIP boxes at the Stadium and is accessed by the Avenue of Havana, in the stands Preference between gates 15 and 16. The fan opening hours are Monday through Friday from 10.00 to 13.30 and from 16.30 to 19.00. Sundays pre-party Saturday, the hours are from 10.30 to 13.30 hours. Match days only ticket offices Palacio de los Deportes de Riazor will open dese 11.00 while supplies last entries.

How to reach Riazor Stadium

Its central location allows walking access from virtually anywhere in the city, although there are several bus lines as 3 or 7 which stop nearby. It should be borne in mind that in two hours before game days Avenue and Havana Street Manuel Murguía are closed to traffic. In addition, its proximity to Round Outerio allows access from outside the A Coruña without crossing the city center.