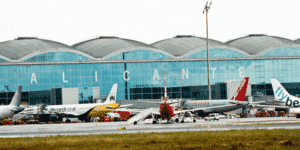 If you have a flight with departure or arrival at the airport Alicante you need to contact your service Customer for any inquiries here you will find free phones in which you can contact without your having to dial expensive 902 numbers or 901 .

In this case the phone you’ll find on this site corresponds to a fixed number starting at 91. Know that calls to such numbers are free if we do from a number with flat rate to landlines as has been common in almost all the rates offered today.

The Alicante Airport is part of the Aena Aeropuertos network so the phone to contact and consult any doubts concerning this airport is the generic Aena, this is the 913211000.

This airport is also known as Altet Airport and serves a large area of very tourist towns and large influx of travelers especially in summer times. It is the closest airport to towns such as Alicante, Elche, Torrevieja, Santa Pola, Benidorm, Altea even some areas of Murcia .

The airport has a large influx especially in the summer months, when it receives visitors from many parts of Europe to welcome tourists who come to spend their holidays on the sunny Costa Blanca.

Among the destinations you can fly from this airport are cities such as Amsterdam, Antwerp, Barcelona, Madrid, Belfast, Berlin, Birmingham, Brussels, Budapest, Dublin, Liverpool, London and many cities. As much of the tourism comes from Germany, Britain and the Netherlands, we can find direct connections to most airports in these countries.